Go to navigation
Dla Wszystkich fanów Repetitor i The Stooges: https://youtu.be/kFxUduX_2pg
https://youtu.be/xwhbhpxalPs
Šajzerbiterlemon is a Belgrade-based trio formed in 2014. Their sound is a blend of crude and abrasive elements of post-punk, noise rock, rock’n’roll and indie. They released their debut EP in 2017, and their willingness to perform wherever possible brought them a deal with headbanging Geenger Records from Zagreb, Croatia, which released their critically acclaimed debut album “Iza naših zidova” (behind our walls) in 2019. The band has extensively performed in the ex-YU region, played at showcase festivals such as MENT Ljubljana and PIN Music conference in Skopje, big open-air festivals like EXIT in Novi Sad, and opened for major Serbian acts like Repetitor and Straight Mickey and the Boyz. Considered by some regional journalists as one of the luminaries of the new Serbian alternative scene, Šajzerbiterlemon is a must see for any aficionado of straightforward garage sounds.
Discography:
EP (2017)
Iza naših zidova (2019)
Youtube channel: https://www.youtube.com/channel/UCZ4352BAcEuMJ8BfG5YWI5g
Facebook: https://www.facebook.com/sajzerbiterlemon
Instagram: https://www.instagram.com/sajzerbiterlemon/
Bandcamp: https://sajzerbiterlemon.bandcamp.com/
Spotify: https://open.spotify.com/artist/1m25ShJdR00Zzl78r4RTfn
Deezer: https://www.deezer.com/en/artist/63118462
iTunes: https://itunes.apple.com/…/%C5…/1458174110
Selection of press quotes:
„Šajzerbiterlemon have cemented themselves as the true representatives od Belgrade underground” – Pavel Lipovšek (Radio Študent, Slovenia)
https://radiostudent.si/…/%C5%A1ajzerbiterlemon-iza-na…
“The trio is the latest of such wild bands to crop up in Belgrade, steeped in musical heritage yet distinguished by rough-hewn beginnings, DIY persistence and a craving to learn, grow and evolve into something big.” – Daniel Sheppard (Europavox)
https://www.europavox.com/bands/sajzerbiterlemon-2/
“Iza naših zidova” (Behind Our Walls) is an unconditional pass to the A class of Serbia’s flourishing music scene. Through a bit less than 30 minutes of their debut album Šajzerbiterlemon are moving in the style of the already iconic Nightrider from Mad Max, not even thinking of retreating an inch from the mad tempo and rhythm of punk and garage rock. – Mihael Pinter (Ziher.hr)
https://www.ziher.hr/iza-nasih-zidova-sajzerbiterlemon…/
“Šajzerbiterlemon are sovereign throughout their debut record and leave nothing to chance.” – Siniša Miklaužić (Muzika.hr)
https://www.muzika.hr/…/sajzerbiterlemon-iza-nasih-zidova/
“My favourite show of the festival that night was Šajzerbiterlemon. Storng and brutal vocal interpratation of frontman Jovan Sibinović, in combination with raw garage sound and expirience (which is inevitable) will turn them into a real powerhouse band and nothing will be able to stand in their way.“ – Ivan Slijepčević (Ravno do dna, Croatia), after the performance at MENT Ljubljana
https://ravnododna.com/sesti-ment-poput-brzog-vlaka…/…
“I would book them just because of the name” – Martin Hossbach (Pop-Kultur, Germany) during a listening session at MENT Ljubljana
„Šajzerbiterlemon are not plain and simple garage punk band. Their music also possesses very crude and abrasive elements of post-punk, noise rock, rock’n’roll and indie music which will shake your feelings upside down and perhaps in any other desired direction … They thought about each part of their debut record and they presented their ideas in a very unique way, so perhaps is not naive to say they’re proper leaders of newer Serbian alternative music scene.” – Đorđe Miladinović (Thoughts words action review blog, Helly Cherry webzine)
https://thoughtswordsaction.com/…/sajzerbiterlemon-iza…/
“Šajzerbiterlemon destroying the downstairs MKC” – Koen Ter Heegde (Yugofuturism) in a facebook post during the band’s performance in Skopje
https://www.facebook.com/koenterheegde/posts/10156960546198831
*The band is a part of new Belgrade underground art scene which is built around a platform called „Hali gali“. The platform started as a one-night festival in Belgrade in february 2019. which gathered young up and coming Belgrade bands. The festival was a huge success (around 1000 people in attendance), had another successful edition in november 2019, and sparked “Hali gali compilation”, a compilation album which consisted of brand new singles by 9 young bands from Belgrade scene. Šajzerbiterlemon’s song “Sve senke” (All Shadows) is the first of nine songs on the compilation. Artists from Hali gali platform shot and released music videos for all 9 singles, which were set in a fictional TV show called “Musical attraction” (an intentional irony since Serbia currently doesn’t have a single TV show about pop/rock music on national TV). This cultural platform was founded and is run by the bands themselves and other young artists.
https://www.youtube.com/channel/UCwt_XNLKglSuB2JaDx27zeA
https://www.instagram.com/haligali____/
https://www.facebook.com/haligaliofficial/ 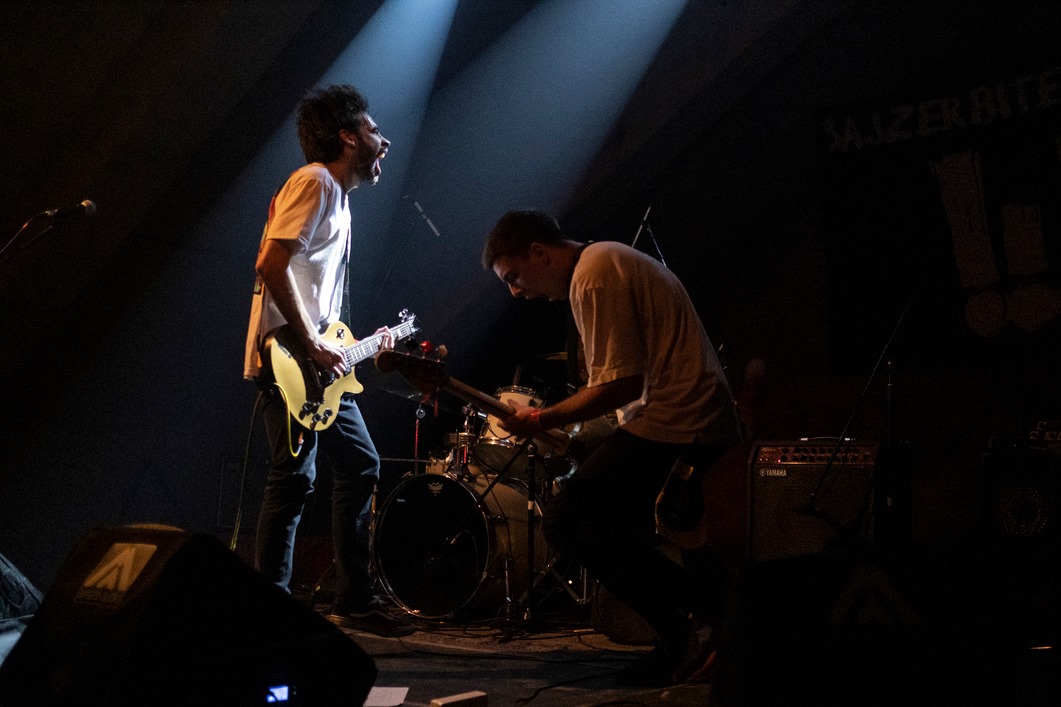